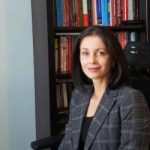 Mariana Bagrin is a researcher at the Institute of History at the Academy of Sciences of Moldova. She holds a Ph.D. in history from Al. I. Cuza University in Iasi, Romania. Her current research focuses primarily on the activities of Moldovan print media during the first postwar decades (1944-1964) in the Soviet Union. Her dissertation examines the measures taken by the Soviet authorities to ensure the qualitative and quantitative growth of the print media in this newly annexed territory, as well as the peculiarities that marked its activity within the broader context of Soviet mass-media. Special attention is given to the similarities and differences in the working methods and practices of Soviet Moldovan mass-media during the Stalin and Khrushchev eras and their impact on local print media’s ability to fulfill the specific tasks assigned by the regime.