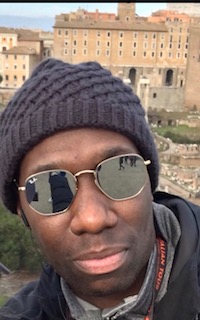 University of North Carolina-Greensboro. I majored in International Global Studies with concentration in Russian and Eastern European Studies.

Q: What do you like about the UNC graduate program in Russian and East European Studies?

The program is enriched with an impressive collection of academics, researchers, and graduate students who possess an inordinate abundance of invaluable knowledge and expertise in various disciplines connected to Slavic, Russian, and Eastern European studies.

Since the late 16th century, the Imperial Russian Empire (and its successive political incarnations) have had an instrumental role in the social, political, and economic transformation of Western civilization. As a result of the region’s continued influence on global affairs, the analysis of its historical evolution is an undoubtedly critical component in deciphering both contemporary international geopolitical machinations involving the Russian Federation as well as the advancement of salient prognostications its future trajectory.

No. However, as a result of my central theme of my research, I have conducted archival research in Amalfi, Salerno, Naples and Rome (in both Russian and Italian). This exercise was done in order to investigate the socio-political dynamics of Russian emigrants, political exiles, and refugees who assimilated into Italian society between the beginning of the 20th century and the start of World War I (1914).

My primary interest involves an in-depth examination of cross-cultural pollination between Imperial Russian Empire and the Kingdom of Italy prior to the October Revolution (1917). One example of these links is the pivotal role Italian architects such as Domenico Trezzini, Francesco Rastrelli, and Antonio Rinaldi played in the construction of Peter the Great’s most famous legacy to his homeland – the visually dazzling metropolis of St. Petersburg. Another pertinent example is the profound influence that members of both the Russian (e.g. Nikolai Berdyaev, Alexander Herzen, Mikhail Bakunin, Maxim Gorky etc.) and Italian (e.g. Francesco Petrarch, Guiseppe Mazzini, Guiseppe Garibaldi, Antonio Gramsci etc.) intelligentsias had on each other’s intellectual development as well as political movements (such as the Risorgimento in the Italian context). Accompanying my enthusiasm for these intriguing dynamics, I also have a strong fascination with the evolution of this unique Russo-Italian relationship following the creation of the USSR.

I hope to have an opportunity to work in either a diplomatic or non-governmental (NGO) capacity in the region. In addition, I wish to earn a Ph.D. History (with specific focus on the interrelationship of Russian, Italian, French histories from the 17th to the 20th century).

I have a deep passion for Russian, Italian and French cinematography of all genres, reading Risorgimento literature (e.g. the captivating poetry of Ugo Foscolo and Alessandro Manzoni) as well as watching professional soccer.

Q. What is your favorite visual reminder of the region and why?

I have two. The first was an old text entitled Soviet Russia, the Land and Its People (1947 written by Nicholas Mikhailov), which I discovered in my grandfather’s personal library as a child. This text helped me form an understanding of the social, political and geographical transformation of the polity. The second was a soccer card of Spartak Moscow and Russian soccer legend, Yegor Titov which I acquired as a teenager. He was an elegant and cerebral midfielder who was one of my favorite players to watch.