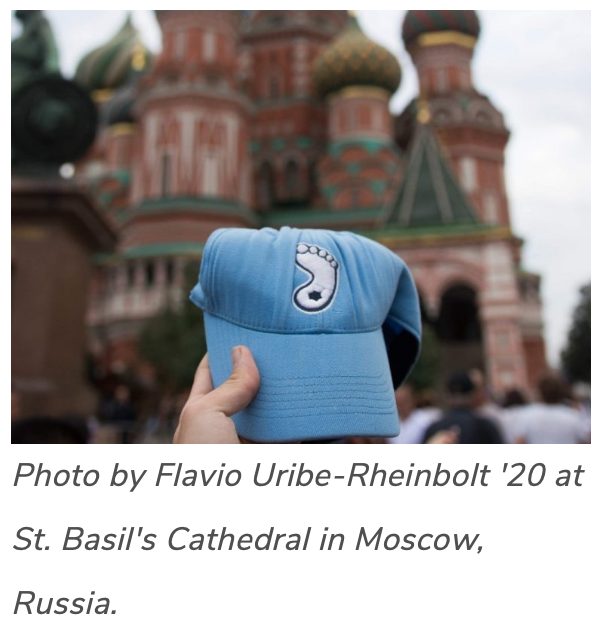 The Russian Flagship Program at the University of North Carolina at Chapel Hill recently completed a successful first year. Launched in April 2020, the federally funded language initiative is the first of its kind in North Carolina and one of only eight Russian Flagship Programs in the United States. The program seeks to answer a critical U.S. national security need for university-educated U.S. citizens with advanced linguistic skills and an in-depth cultural understanding of Russia and Russian-speaking countries.

With the support of the national Language Flagship program network, Stanislav Shvabrin, director of Carolina’s Russian Flagship Program and associate professor of Russian, and his team have established a thriving community of dedicated Russian language learners and instructors.

“Building on a strong tradition of Russian studies at Carolina, our Flagship Program has welcomed new team members, put in place an all-important individual and small-group tutoring system, built a summer program and enhanced Carolina’s current Russian curriculum to meet the needs of our students,” said Shvabrin.

Throughout their time in the program, students participate in academic and co-curricular programming, and receive logistical and financial support for summer study abroad in a Russian-speaking country as well as a capstone academic year studying in Almaty, Kazakhstan. Students take part in the capstone year once they have successfully finished all other undergraduate graduation requirements.

During the capstone year abroad, students undertake advanced Russian language coursework, enroll in a major-related course taught in Russian with local students at Al-Farabi Kazakh National University and complete a professional internship in the language.

“Then they have tangible experience on their resume to help launch them into their field of choice,” said Meredith Doubleday, assistant director of the Russian Flagship Program. Many students pursue career paths in a variety of fields ranging from diplomacy to business.

The Department of Germanic and Slavic Languages and Literatures (GSLL) and the Center for Slavic, Eurasian, and East European Studies (CSEEES) were awarded $1.2 million in April 2020 from the U.S. Department of Defense funded Defense Language and National Security Education Office’s (DLNSEO) The Language Flagship program to launch the new Flagship at Carolina.

Adnan Džumhur, associate director of CSEEES, worked with Shvabrin to prepare the proposal that brought the Russian Flagship program to Carolina. Džumhur said that historically, Carolina has had a strong Russian program in addition to many Russian studies courses, which helped lay the foundation for the Flagship program.

“CSEEES has over 40 affiliate faculty, with the majority of them specializing in Russia-related research in fields like anthropology, history, political science, linguistics, and economics,” Džumhur said.

With faculty members researching Russia across so many disciplines, Carolina was able to present a comprehensive profile in Russian studies in addition to language instruction in the grant proposal.

In its first year, the program has exceeded enrollment expectations.

“We were initially planning on accepting about 20 students, but at the end of the first year alone we have almost 40 program participants,” Džumhur said. “I think this speaks to the broad appeal of the Flagship program, and the recognition the Flagship students are receiving nationally through programs such as Boren, CLS, and others.”

UNC Russian Flagship students have already been recognized nationally for their accomplishments in just the first year of operations. Two of the program’s students, Griffin McGuire’ 21 and Lucas Risinger ’21, received the prestigious Boren Scholarship this year, which funds overseas language study followed by at least one year of employment in a national security position with the U.S. federal government. Christina Oh ’22 received a Critical Language Scholarship (CLS) to study Russian this summer. CLS and Boren scholars gain critical language and cultural skills that enable them to contribute to U.S. economic competitiveness and national security.

“It is no accident that the two national-security-focused Boren Scholarships and one out of the two Critical Language Scholarships awarded Carolina students this academic year went to Russian Flagship students,” Shvabrin said.

Barbara Stephenson, vice provost for global affairs at UNC-Chapel Hill, has been supportive of the program since its launch and looks forward to seeing it continue to thrive.

“The standout success of Carolina’s Russian Flagship Program – even in its first year– comes as no surprise to me.  The talented leaders of CSEEES focus on student success and deliver excellence, attracting first-rate students to the program.  As my office builds out the new Diplomacy Initiative, I look forward to continued close collaboration with CSEEES and the Russian Flagship Program as we bring foreign affairs practitioners to Carolina to round out the superb language instruction– and prepare our graduates to excel in careers in diplomacy and related national security fields.”

Ultimately, the program aligns with UNC-Chapel Hill’s long-term goals of infusing campus with a global mindset and preparing the next generation of leaders to address the greatest challenges of our time. Russian is just one of the multiple critical foreign languages taught at Carolina, which offers students a remarkably rich menu of options for pursuing a transformative global education.