SEE Forum • Sarajevo: Writing and Translating a City in Wartime 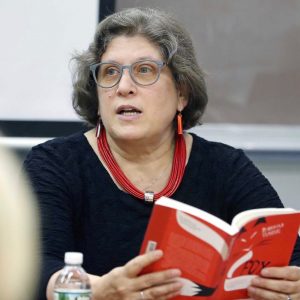 Ellen Elias-Bursac translates fiction and non-fiction from Bosnian, Croatian, and Serbian. Her translation of David Albahari’s novel Götz and Meyer received the 2006 ALTA National Translation Award. Her book Translating Evidence and Interpreting Testimony at a War Crimes Tribunal: Working in a Tug-of-War was awarded the Mary Zirin Prize in 2015. She is the vice-president of the American Literary Translators Association. Paula Gordon is a translator and editor. Her translations of stories, essays, and poems by Bosnian, Croatian, Montenegrin, and Serbian authors have been published in print and online. Since late 2013, she has been working with Montenegrin playwright Ljubomir Đurković; her translation of his 2002 play Refuse [Otpad] will be published by Laertes Press. Before becoming a translator, Paula worked in Bosnia and Herzegovina with humanitarian aid agencies and on the production team of the Sarajevo Film Festival.

This event is presented by the UNC Forum on Southeast Europe. Co-hosted by the Theatrical Translation as Creative Process Festival and the Department of Dramatic Art.