The Bloody Victory: Postwar Violence in Europe in Comparison, 1944-1946

Immediately after the end of World War II, a wave of violence emerged in most of the former occupied European countries. Ethnic Germans, national traitors, and collaborators were being humiliated, beaten and even killed. The postwar violence was much more than a sum of uncontrolled outbursts of irrationality and hysteria. It became a tool for the reshaping and rebuilding of collective identities and postwar societies threatened and shaken by Nazi Germany’s occupation policies and its particular understanding of ethnicity and race. The experience of taking part in collective violence strengthened the feeling of belonging. Thus, entire collectives of perpetrators and bystanders jointly determined and performed what should constitute a fair and “clean“ post-war national society. Approaching postwar violence from this perspective can shed new light on our understanding of how “ordinary people” form collective identities, societal changes in wartime, and state responses to collective violence when establishing legitimacy to a new political and social order. 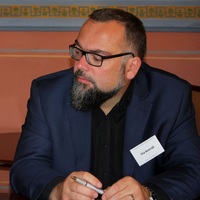 Ota Konrád is an associate professor of modern history at the Charles University in Prague, where he also serves as the chair of German and Austrian studies. He is the co-author (together with Rudolf Kučera) of Out of the Apocalypse: Physical Violence in the Fall and Reconstruction of Central Europe, 1914–1922 (Academia, 2018). Currently, he is preparing a broad comparative project about collective violence as a tool for reshaping national identities at the end of the WWII in Europe.

The Carolina Seminar: Russia and Its Empires, East and West is co-sponsored by the Carolina Seminar Program, the UNC Department of History, and the UNC Center for Slavic, Eurasian, and East European Studies. Please note that the participants will give an overview of their projects, but will not read a formal paper. Instead, papers or book chapters will be circulated ahead of time to those who are interested in attending and participating in the discussion. To request a copy of the paper, please email Dr. Eren Tasar (etasar@email.unc.edu).