Book Talk • The Lands in Between: Russia v. the West and the New Politics of Hybrid War 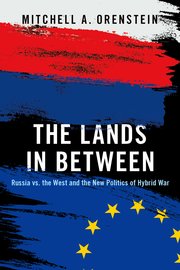 Join the author Mitchell Orenstein for a discussion of his book “The Lands in Between. Russia vs. the West and the New Politics of Hybrid War” (Oxford UP, 2019). Orenstein is Professor and Chair of Russian and East European Studies at University of Pennsylvania and Senior Fellow at the Foreign Policy Research Institute.

Frontline states between Russia and the EU hold powerful lessons for Western countries. There, hybrid warfare has polarized parties and voters into two camps: those who support a Western vision of liberal democracy and those who support a Russian vision of nationalist authoritarianism. Today we see politics in more and more Western countries following suit. Paradoxically, those who rise to the pinnacle of the political system in the lands in between are often non-ideological power brokers who have found a way to profit from both sides, taking rewards from both Russia and the West.