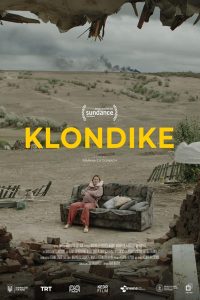 July 2014. Expectant parents Irka and Tolik live in the Donetsk region of eastern Ukraine near the Russian border. Their nervous anticipation of their first child’s birth is violently disrupted as the vicinal crash of MH17 airliner elevates the forbidding tension enveloping their village. The looming wreckage of the downed airliner and an incoming parade of mourners emphasize the surreal trauma of the moment. As Tolik’s separatist friends expect him to join their efforts, Irka’s brother is enraged by suspicions that the couple has betrayed Ukraine. Irka refuses to be evacuated even as the village gets captured by Russian separatist forces, and she tries to make peace between her husband and brother by asking them to repair their bombed house. Writer-director Maryna Er Gorbach creates a meaningful, empathetic ode to resilience as KLONDIKE viscerally delineates the couple’s dawning uncertainty of life in a warzone.

In Ukrainian, Dutch and Russian with English subtitles • DCP • 100″

The screening will be followed by a discussion on the war in Ukraine with Jessie Barton Hronešová (Marie Skłodowska-Curie Global Fellow), Graeme Robertson (CSEEES Director) and Milada Vachudova (UNC, Political Science).