Film Screening • The Earth Is Blue as an Orange 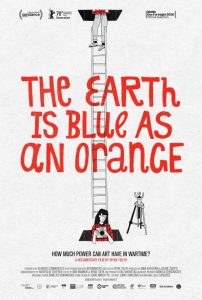 Exquisitely shot and bold in its storytelling approach, director Iryna Tsilyk’s documentary follows single mother Anna and her four children as they document their lives under siege in Eastern Ukraine.

Eldest daughter Mira dreams of becoming a cinematographer. As bombs descend on neighboring homes, the family construct, act in, and edit stylized scenes of dangerous predicaments they’ve lived to tell. Mira’s re-creations ratchet up the drama, using local soldiers, tanks, and even her own grandmother to tell terrifying tales of survival. Meanwhile, Iryna quietly captures their more quotidian moments during their shoots and in between takes—scenes that include Mira’s siblings squabbling over line readings, cozy dinners by the fire, and Anna’s compassionate gaze as she watches Mira apply to film school.

Eventually, the two projects fuse into a single vision that gorgeously encapsulates the extremes of war, both its explosive trauma and its mundane peripheral existence in everyday life. With miraculous insight, The Earth Is Blue as an Orange observes a family—and a filmmaker—cope with war using their cameras, working in tandem to create meaning out of a meaningless conflict.

Winner of the Directing Award for World Cinema Documentary at the 2020 Sundance Film Festival.