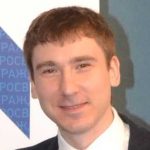 Stanislav Stanskikh is a legal scholar and community organizer focusing on Russian constitution, government, political institutions, and constitutional history, as well as U.S. immigration policies and asylum process. After graduating from the Law School of Lomonosov Moscow State University with a J.D., Stanislav made a substantial career in Russia. He worked at TNK-BP (among the ten largest private oil companies in the world), the Russian Foundation for Constitutional Reforms, the Russian Presidential Commission for the Rehabilitation of Victims of Soviet Political Repressions, and Lomonosov Moscow State University. He was the co-founder and editor of the Russian Constitutional Court academic publication Constitutional Justice Journal.