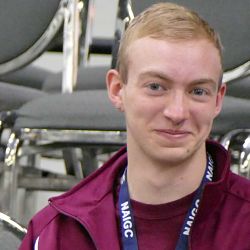 I received my BA in History from Virginia Tech last May, and I also minored in Russian Area Studies.

The most appealing thing to me about the program when I applied was its interdisciplinary nature. My background is in history, and I do consider myself a historian, but I also have interests in Slavic languages, culture, geography, and geopolitics. However, the incredible faculty at UNC were what really convinced me to come here. Everyone I talked to was friendly, helpful, and obviously passionate about their work. I am incredibly excited to work with them.

I was lucky enough to grow up with a history buff for a father, and he would usually talk about history over dinner. My favorite stories were always those of the Eastern Front of World War II and particularly the Battle of Stalingrad. That fascination only grew when I started studying Russian history more deeply in undergrad. Additionally, my dad’s side of the family is of Slavic descent, mostly Czech, so I feel a connection to the region through that.

I studied abroad in Daugavpils, Latvia over the summer of 2017. I had never given much thought to the Baltic States prior to this experience, but I was fascinated by the cultural and ethnic tensions that still exist with Russia in the region. The Baltic view of both World War II and the Soviet Union is quite different from the usual American view, so it was an eye-opener for me.

It is difficult for me to narrow down my interests, as I have so many. Currently, I want to explore the diplomatic and political relationships between the Soviet Union and the satellite states of Eastern and Central Europe during the Cold War, specifically the Soviet-Czechoslovak relationship. I also took a course on Balkan history at VT, and would like to study that region in more depth as well.

I would like to work for the State Department after graduation, either in the Foreign Service or as an analyst.

I used to be a gymnast and I enjoy watching gymnastics competitions. I do not train seriously anymore, but I do still enjoy running through some old gymnastics workouts. I also follow the Washington Capitals ice hockey team. In the realm of non-sports-related activities, I enjoy trying out new restaurants and cooking. 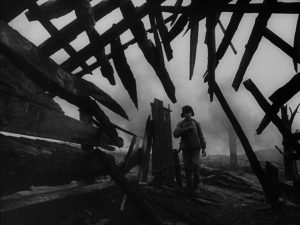 I love Soviet war films and the films of Andrei Tarkovsky, so I will say this still from Ivan’s Childhood. Tarkovsky’s films are full of symbolism and frequently dreamlike. Even though Ivan’s Childhood is more linear than his later work, the symbolism is certainly present. This shot manages to convey menace and fear in an extremely effective way. It’s an iconic shot for good reason.